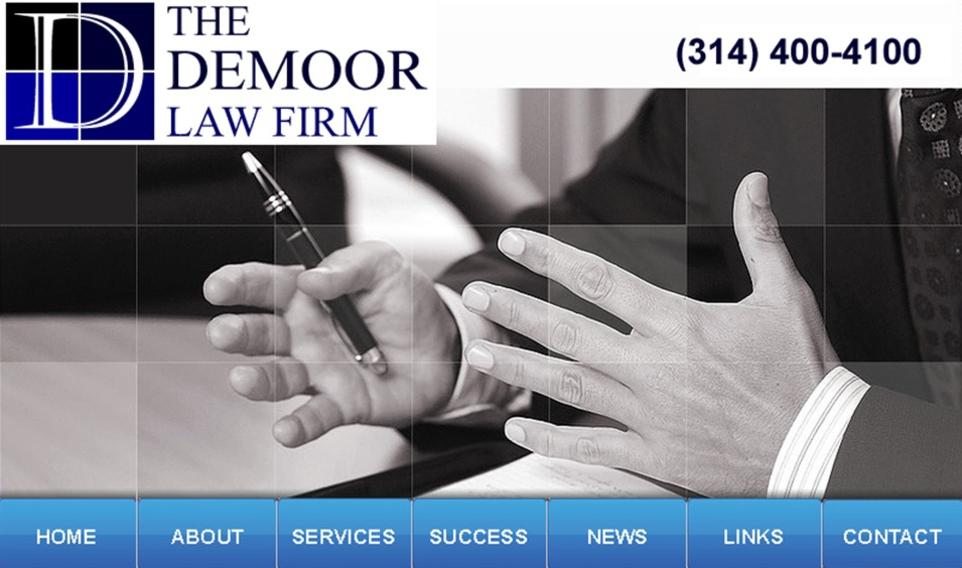 DISCLAIMER: The DeMoor Law Firm LLC has provided the information on this Website for informational purposes only. The information is not legal advice and does not create an attorney-client relationship. The information gleaned from this site is not an alternative to or substitute for legal advice from a lawyer. Any testimonials or mention of previous cases is not a promise or guarantee of the same outcome for every case. Each legal case has its own set of facts and merits. This Website makes no guarantees as to potential success, recovery or any outcome. The choice of a lawyer is an important decision and should not be based solely upon testimonials or advertisements. This Website is not intended to solicit clients for matters outside the state of Missouri.

Perhaps one my greatest pleasure as an attorney has been to assist families with adopting a child.  Often they are children who have been abandoned and are going to get a new home. Other times a mother and/or father have realized that given their own personal circumstances, it is in their child’s best interest to have new parents to care for their child. In any case, the outcome is certainly positive and joyful for everyone in the process.  Feel free to call me to explore what your adoption options may be.  Below I have put together information from the Missouri Bar about adoptions that might prove helpful to you.

Adoption is a legal process that establishes a parent/child relationship between two people who are not otherwise related by blood. There are three sets of participants in an adoption: the petitioners (the adoptive parents, who are seeking to adopt the child); the child to be adopted; and the birth parents (the biological parents of the child to be adopted). Not only does the adoption create a new legal relationship between the adopted parents and the child, but it also severs or terminates any legal relationship existing between the child and his or her biological parents. It is, therefore, a significant legal, financial, social and emotional step for all parties involved.

While most adoptions involve children, occasionally petitioners may seek to adopt an adult (a person over the age of 18 years). The information in this website deals primarily with the adoption of children under the age of 18, but the basic procedures discussed apply to all types of adop­tions. When the person to be adopted is 18 years or older, the consent of the biological parents is not required. The decision to place a child for adoption may arise under a variety of circumstances. Occasionally, parents find it impossible to financially sup­port their child or children. After considering other options, they may de­termine that placing their child for adoption is the most responsible course of action. More often, unwed parents find that they are unable to assume the responsibilities of parenthood and feel that adoption would be in the best interest of their child. The most common type of adoption is that in which a stepparent seeks to adopt the child or children of their current spouse. For example, this may occur when the natural parent remarries after the death of their former spouse or after a divorce where the other natural parent is willing to con­sent (agree) to the adoption. A similar situation may arise when a child is born out of wedlock and the natural parent later marries, with the steppar­ent desiring to adopt the child. These are known as stepparent adoptions.

All adoptions filed in the state of Missouri are governed by the same basic set of laws (called “statutes”). However, procedures in different counties may vary slightly, due to differences in local rules and practice. Persons interested in adoption should seek the advice of an attorney who practices in the county where the adoption is to be filed to ensure that local procedures are followed. Failure to conform to the local law and proce­dure may result in delays or, worse, in the court’s outright refusal to allow the adoption.

Any person seeking to adopt must file a petition in the family or juve­nile court. The petition may be filed in the county in which:

It is generally the practice that married persons jointly seek permis­sion to adopt, although it is possible for individuals (whether married or unmarried) to petition the court. Missouri law requires that those seeking to adopt (petitioners) must be of good moral character and must possess the ability to care for, maintain and educate the child. The primary goal of each adoption proceeding is to promote the best interest and welfare of the child to be adopted.

Even long after the adoption has been approved by the court, there are legal restrictions in Missouri on an adopted adult’s ability to seek informa­tion regarding his or her biological parents. These procedures are another effort to protect the identity of biological parents who have placed their child for adoption and may not wish to be tracked down by the child at a later date.

Each adoption is unique, but in Missouri most follow a similar process. A child may be placed for adoption by the child’s parents, the Children’s Division, a licensed adoption agency, or by an attorney, physician or cler­gyman. No transfer of actual custody can take place without prior court approval. Also, before a child can be placed with adoptive parents, state law requires the adoptive parents to undergo a home study by a licensed social worker. State law also requires the birth parents and child to un­dergo assessments, which will be provided to the prospective parents.

Petitioners will be required to disclose any and all fees they have paid related to the adoption — called an “accounting.” If the petitioners have paid any expenses not allowed by law or approved by the court, or if the fees paid are unreasonable, the court may not approve the adoption

If a birth parent does not consent to the adoption, adoptive parents would have to prove the consent is not required because one of the following exists:

​If the person to be adopted is 14 years of age or older, his or her written consent to the adoption is required.​

The adoption process under Missouri law is a two-step proceeding. The first step involves the transfer of legal custody of the child to the adoptive parents, and the second step is the actual adoption six months later. Once the petition for transfer of custody and adoption is filed, the juvenile court appoints an attorney to act as guardian ad litem to represent the interest of the child who is to be adopted. Before the court enters a final decree of adoption, the adoptive parents must have had lawful and actual custody of the child for a period of at least six months. At the conclusion of the six-month period, a final adoption hearing is held. At this hearing, the court determines whether it is fitting and proper that the adoption be allowed.

When a child is adopted, all relations and rights between a child and its biological parents are terminated, and the child is viewed legally as if it were the natural child of the adoptive parents. Specifically, the biologi­cal parents no longer have any rights to contact with or information about the child, although sometimes the adoptive parents will agree to maintain some contact. Further, the child has no right to inherit from his or her biological parents. In a stepparent adoption, the grandparent (the parent of the non-adopting biological parent) may continue to have visitation rights even after the adoption is granted.